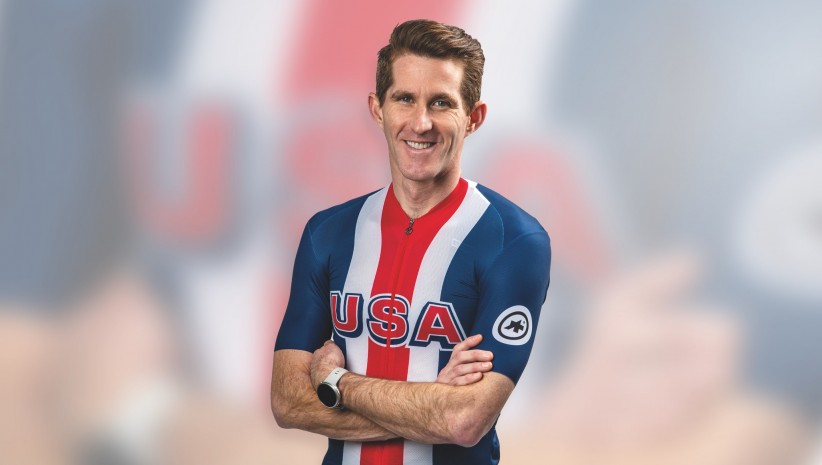 Last December, as Holden Comeau prepared to mount his bike for the first-ever ECI Cycling Esports World Championships, a drug tester from the World Anti-Doping Agency showed up at his door. The tester had been told that Comeau ’03 Lib was an indoor cyclist but assumed this meant that Comeau rode on an enclosed track. Comeau had to explain to the tester that he actually rode the 50-km race on a stationary bike in his basement.

Comeau is not just a pioneer in the fledgling sport of esports cycling; at 43, he’s one of the best in the world. After an All-American career as a swimmer at Penn State, Comeau competed professionally in triathlons, but as he grew older and started a family, the grueling training sessions began to wear on him. That’s when he joined a virtual training app called Zwift, which offered the opportunity to compete in virtual races from home. He woke up early and completed a race every morning; soon, he became the top-ranked rider on Zwift and joined Team Saris + The Pro’s Closet, the top-ranked team on the platform.

“I can do an hour race before the kids wake up, and then I’m off the bike,” Comeau says. “I hop off at 7, get the kids ready for school, and get on with my day.”

In the meantime, Comeau has also tailored his day job toward his new passion—he’s started a consulting business that helps companies find sponsorship opportunities in esports such as cycling. For now, Comeau is enjoying every ride; he knows that he may not be able to stay at the top for very long, as younger and more experienced riders join the sport. But it’s helped him satisfy the competitive urge that’s lingered since college.

“It actually resembles the kind of effort I used to put in every day at swim practice at Penn State,” he says. “The crossover to this sport is almost perfectly aligned.”