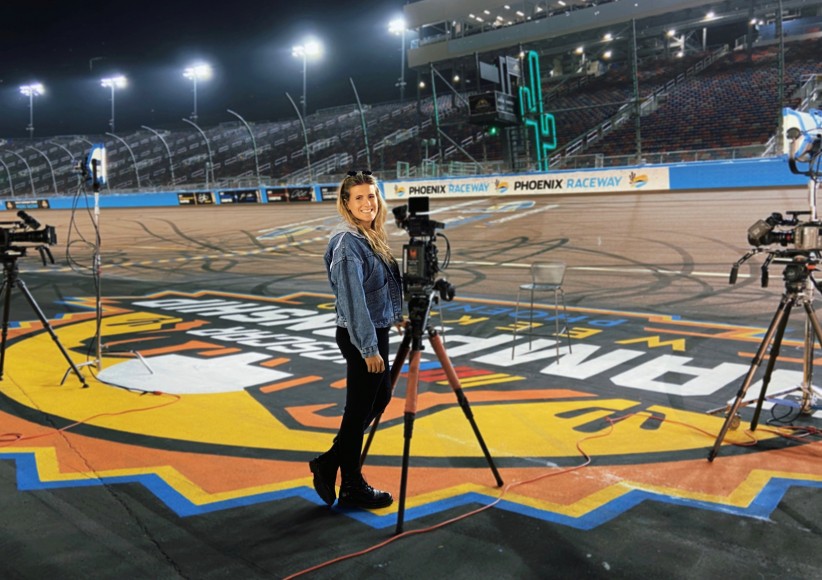 When Morgan Giannone started producing The Pace Lap, it was a six-minute race recap filmed in a makeshift studio. Today, the half-hour NASCAR program, which airs on cable and streaming network MAVTV, reaches fans in nearly 80 countries. “The payoff of growing something and seeing it through is the best feeling ever,” she says.

Giannone ’17 Com was a junior when she landed a production internship in 2016 working with Fox Sports on the Race Hub TV program and for NASCAR’s digital team. She continued in those roles after completing her broadcast journalism degree, then joined NASCAR Productions’ international team as a producer in 2017. Prior to that, NASCAR had been broadcasting globally but didn’t have a production team dedicated to an international audience. As one of the first members of that team, Giannone helped implement content designed to educate and entertain new audiences. “It made you have to be creative with your content and tailor it to an audience that was less familiar with the sport,” she says.

Giannone, who recently returned to Fox Sports, credits her time at Penn State—including an influential communications course taught by Jeff Brown and a director of communications role with the Lion Ambassadors—with preparing her for her career: “I was integrated into this world before I got here.”