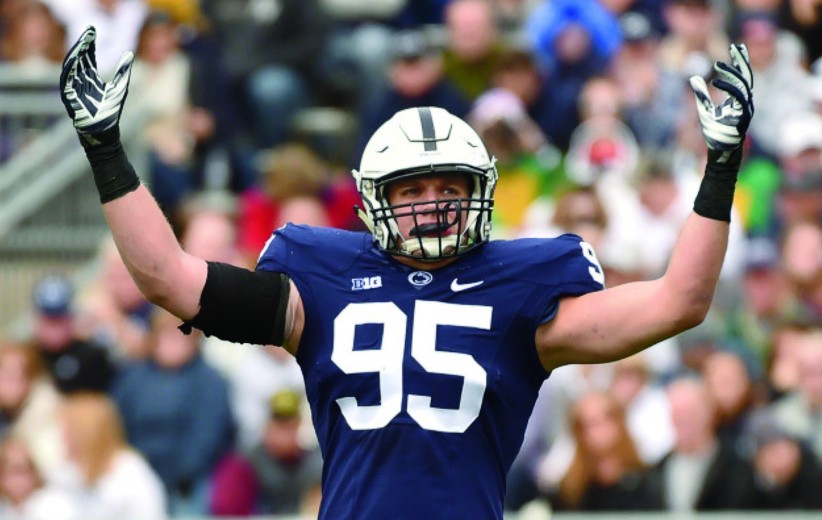 From the yard of his home in West Chester, Pa., former Penn State defensive end Carl Nassib ’15 Sci filmed a matter-of-fact video in June and posted it to his Instagram account. “I just wanted to take a quick moment to say that I’m gay,” Nassib said, and with that, he broke new ground in professional football, becoming the first active NFL player to declare his homosexuality.

Nassib, 28, began his career as a walk-on at Penn State before becoming a unanimous All-American and the Big Ten Defensive Player of the Year in 2015. He played for the Cleveland Browns and Tampa Bay Buccaneers before signing a three-year, $25 million contract with the Las Vegas Raiders in 2020. He follows in the footsteps of Michael Sam, the former Missouri star who came out as gay before the 2014 NFL draft but never played a regular-season down in the league; and Dave Kopay, the former NFL running back who came out as gay in 1975, after his retirement.

Whether or not homophobia affected Sam’s career trajectory, Nassib’s declaration—which was greeted positively by former teammates, many NFL players, and President Joe Biden—was viewed as a major step toward equality and acceptance in a sport that has often been defined by limiting notions of masculinity. “If you know Carl, you know his strength,” said Penn State coach James Franklin, who announced a $10,000 donation to The Trevor Project, an LGBTQ suicide prevention and crisis intervention organization to which Nassib himself donated $100,000.

Nassib is not the first gay Penn State athlete to break new ground: In 2007, former Nittany Lion basketball player John Amaechi ’94 Lib became the first former NBA player to come out as gay. Appearing on Dan Le Batard’s popular radio show the day after Nassib’s announcement, Amaechi said, “There is a young person with a greater sense of hope today because of this young man. That is a good thing.”