A preview of the Nittany Lion athletes set to shine in front of in-person crowds this fall. 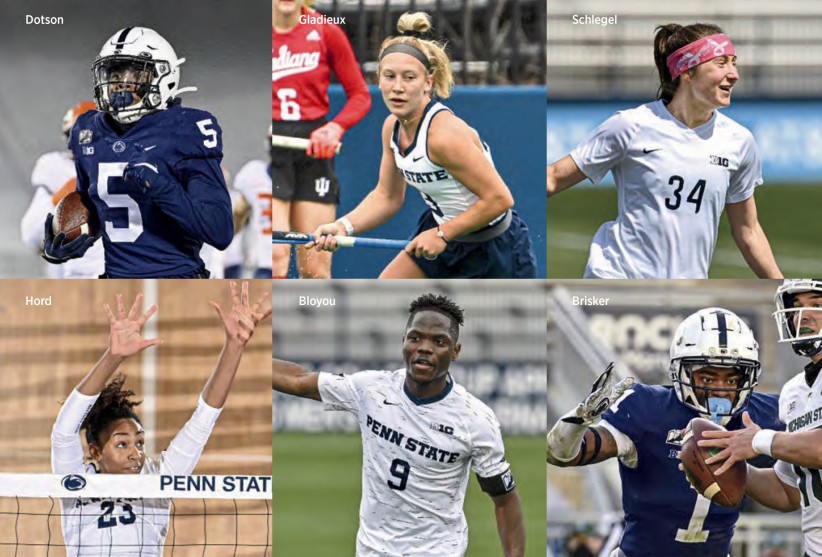 The virtual Penn State Coaches Caravan in June channeled an almost tangible energy, one that infused every coach’s camera space and spilled out of athletic director Sandy Barbour. “All I can say is, finally,” Barbour nearly shouted.

Yes, finally, fans can return this fall to Beaver Stadium and other campus venues to watch teams whose 2020 seasons were played without fans and, with the exception of football, were delayed until spring. And those teams should be pretty good: Penn State was one of just five schools to advance its men’s and women’s soccer teams to the NCAA Sweet 16, and the women’s volleyball team qualified for its 40th NCAA tournament, something no other program has accomplished. Here’s a look at some of the fall athletes due for big seasons.

Jahan Dotson could have entered the NFL draft this past spring. He led the Big Ten in receiving yards and scored five touchdowns of 50 yards or longer, including an 81-yard punt return against Michigan State. But Dotson and defensive teammates Jaquan Brisker and Tariq Castro-Fields decided collectively to return after last season’s 4–5 finish, distilling their commitment into one combined statement: “We know Penn State football is used to winning, and that’s what we’ve got to do,” Dotson said.

In that other “football,” Ally Schlegel and Danny Bloyou were two of the Big Ten’s top soccer scorers last spring. Schlegel, a junior, led all Big Ten women in scoring in 2021 and twice has led the Lady Lions, having posted 61 points (with 24 goals) in 41 career games. Bloyou was the men’s top scorer, with eight goals. The returning All-Americans are also known for their creative celebrations: Keep an eye out for Schlegel’s swim move and Bloyou’s corner flag-guitar riff.

Kaitlyn Hord, a 6-foot-4 middle blocker, is a game changer in women’s volleyball. The three-time All-American led Penn State in both hitting (.421 percentage) and blocks (79) last season—little wonder she was invited to train with the USA Volleyball women’s national team this summer.

And field hockey’s Sophia Gladieux asserted herself as one of the Big Ten’s best during a thrilling freshman season. The All-American finished third in the Big Ten, with 26 points, including 12 goals.