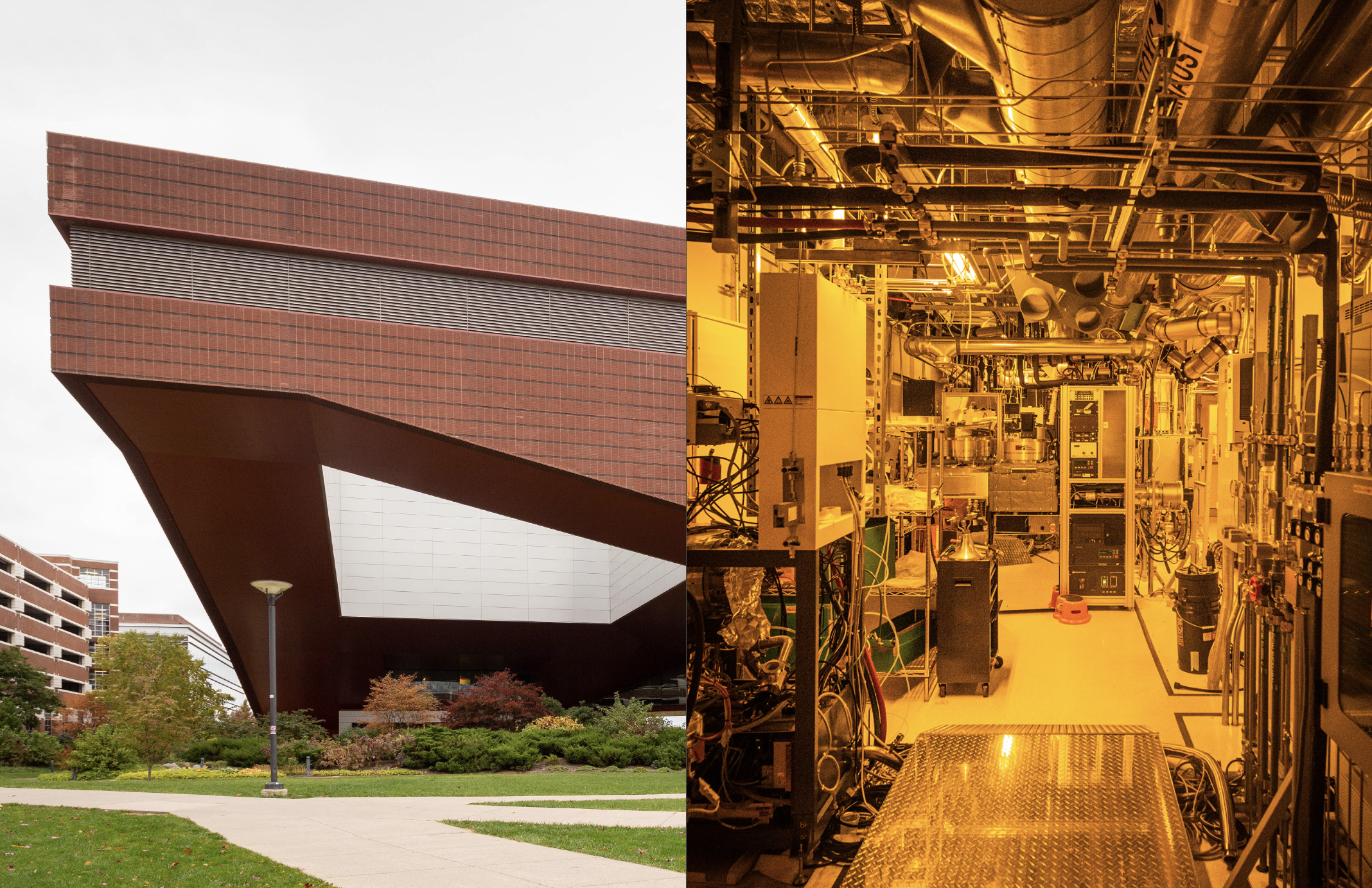 A few years ago, Andrew Read was studying Marek’s disease, a poultry virus that causes nerve or tumor damage and can be devastating to commercial or backyard chickens. Moriah Szpara ’98 Sci, an associate professor of biology and biochemistry, was researching a similar virus in humans at the time.

“We realized we had exactly the same problems,” says Read, director of the Huck Institutes of the Life Sciences. “I wouldn’t have gone looking for somebody like Moriah because I wouldn’t have realized I needed someone like Moriah, apart from the fact that in talking to her all the time in the building it became very clear she could offer things.”

Such hallway conversations occur often in the Millennium Science Complex, which was the point of the building’s design—and of the convergence of the university’s materials and life sciences departments. The L-shaped structure sits across the street from Pollock Halls and near the southeast corner of Eisenhower Auditorium on the University Park campus. Its two wings meet to form a cantilever that stands some 150 feet above the plaza. In the specially designed labs below ground, and in both wings above ground, researchers from the Huck Institutes of the Life Sciences and Materials Research Institute create more durable and flexible materials for electronics, discover innovative methods of treating infectious diseases, and are regularly inspired by the work of their colleagues in the building. 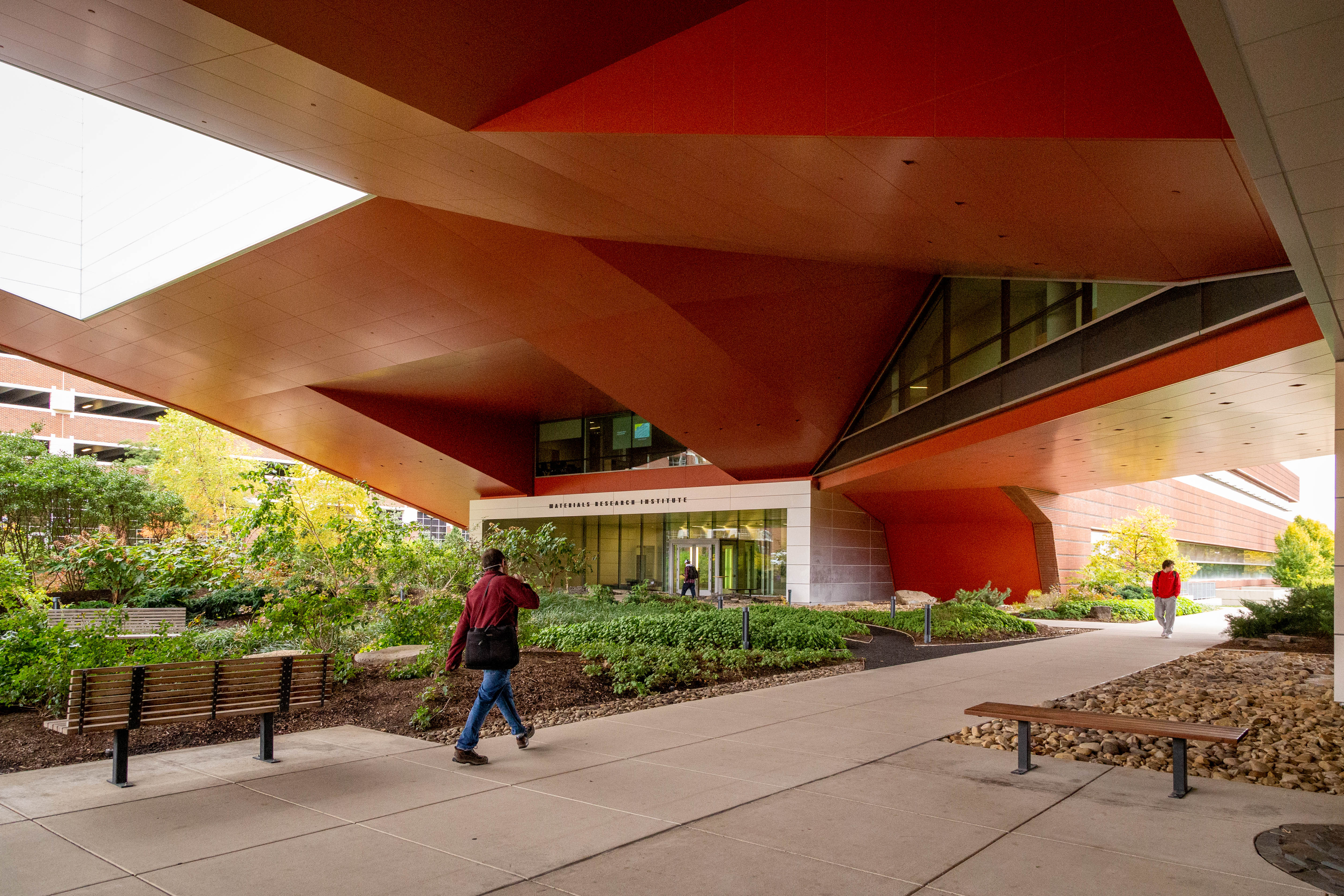 The 297,000-square-foot, $225 million facility was many years in the making. In 2001, the Materials Research Institute merged with the Materials Research Laboratory, which had previously operated largely on its own. Meanwhile, the university’s life sciences program was growing to the point where it was going to need an additional building.

Several Penn State administrators—including Eva Pell, then–vice president for research and dean of the Graduate School, then–Huck director Channa Reddy, and then–MRI director Carlo Pantano—recognized the opportunity to bring the university’s materials science and life sciences departments together under one roof. After some initial reservations about what would be a costly project, the university administration agreed, expressing the desire for a building that would showcase the university’s research prowess and also turn heads on campus. Penn State had some funding for a shared facility but had to pitch then-Gov. Ed Rendell for the rest of it.

“Rendell thought all great science happened at Penn,” Pell says, “so selling him on Penn State was always a challenge.”

The university’s pitch highlighted its strength in materials science, which intrigued the governor, and Penn State wound up securing approximately $80 million in state funding for the project. The building, now one of Penn State’s signature facilities, was approved, and the Huck-MRI pairing was a fit that made so much sense to many.

New York–based Rafael Viñoly Architects led the design for the project. Viñoly had also designed the College of Information Sciences and Technology’s Westgate Building, which opened in 2004 and spans North Atherton Street; with the Millennium Science Complex, he sought to build a bridge between the two institutes that worked both structurally and functionally; it didn’t hurt that building one facility instead of two accelerated the process and saved on costs. “What you consider to be the biosciences needs a lot of support from people that are more on hard sciences—computing or mathematics or statistics or physics,” says Viñoly. “When you get into the way in which people in science progress in terms of research, it’s all based in collaboration and, above all, in testing other people’s ideas that at first glance may not have anything to do with each other.”

Construction began in the summer of 2008. Hudson, Pantano, and a group of other Penn State faculty worked with Viñoly and general contractor Whiting-Turner on how the building would be laid out, how the lab space would be structured, which departments would be housed in the facility, and which needed to remain in existing buildings on campus. Dave Sarge, then director of facilities at the Electronic Materials and Processing Research Laboratory who would become the building’s facility manager, represented the faculty with the design and construction crews throughout the process.

There were challenges, including rising materials costs and audiovisual equipment that needed to be completely reinstalled. The original design called for the building to include four floors, but it wound up being three to cut costs. Additional air handling units and the installation of a hazardous service corridor, both made necessary by the cleanroom labs, delayed construction.

The complex includes 60,000 square feet of green roof, which reduces heat and filters pollutants and carbon dioxide from the air (and, for a time, was also home to honey bee colonies used by the College of Agricultural Sciences’ Center for Pollinator Research). The overhangs and deep-set windows at the ends of the wings help deflect heat in the summer and admit lower winter light, helping to reduce heating and cooling costs. Even a decade ago, Viñoly says, he considered sustainability more of a requirement than an option in the design.

“People ask if sustainability is important,” Viñoly says. “It’s the same as asking, ‘Do you think your building should stand for more than 10 minutes?’” The efforts would be recognized in 2013, when the complex received LEED (Leadership in Energy and Environmental Design) Gold certification from the U.S. Green Building Council.

As for the name: Numerous options were kicked around, including a few that referenced the interdisciplinary nature of the facility, but ultimately Millennium Science Complex won out. Pantano told Hudson, “I don’t care what it’s called— what I want is the lab space.”

By the summer of 2011, faculty had begun to move into the building. The Huck Institutes and MRI had already begun bringing in new faculty members and had found temporary space for them elsewhere on campus as construction was being completed. Additional faculty began arriving and moving into the building later in the fall and throughout 2012. Space in the labs was coveted, and Hudson and Pantano had some hard choices to make about who would receive it.

“My bottom-line decision on that was, ‘How will you interact with the people in there?’” Hudson says. “‘Who are the people you’ll connect with in the first instance and the second order?’”

Hudson conducted regular assessments of those who worked in the complex and relocated faculty who weren’t collaborating; he even considered having faculty change offices every two or three years so that they would have more opportunities to form relationships with peers they might not have otherwise met. That idea was met with pushback and never came to fruition, but the general idea of convergence was felt throughout the complex almost immediately.

“The building was nothing like there was anywhere else,” recalls Read, who as a professor of biology and entomology was part of the first group to produce data in the Millennium Science Complex.

The space inside the building was carefully designed for function—meeting the current and future needs of researchers. There are roughly 8 to 10 feet between each floor, a design feature meant to allow for extra wiring or air ducts as lab equipment evolves. There are 40,000 square feet of clean lab space, which include 10,000 square feet of Class 100 cleanrooms—which use exacting filtration systems to maintain a maximum of 100 particles per cubic meter of inside air—for nanofabrication, which is the design and manufacture of new materials and processes.

The Huck side of the building, which runs east-west, includes office (or lab) space for 33 tenure-track faculty and, at any given time, between 100 and 125 graduate students; the MRI side, which runs north-south, houses 35 faculty and roughly 75 graduate students. (Some of the collaborators have offices elsewhere on campus.) The shared lab space on the above-ground levels operates on the accordion principle, explains Read; when one group receives grant money for an extensive project, it will bring in more people, and other groups in the lab will shrink, if only for a short time.

“In the Millennium Science Complex, the concept of a department doesn’t matter,” says Read, who became director of the Huck Institutes in 2019. “Everybody’s in there because of their particular expertise, and the people come from different departments.”

Formal efforts to bring together faculty take place each Tuesday in the Millennium Science Café in the third-floor commons area; similarly formatted discussions took place virtually during the height of the COVID-19 pandemic. Faculty from both institutes, or elsewhere on campus, deliver scheduled talks before audiences of faculty and graduate students.

Those talks have regularly sparked the sharing of ideas, some of which have led to significant changes for researchers. Clive Randall, the director of the Materials Research Institute, recalls a time when David Hughes, the Dorothy Foehr Huck and J. Lloyd Huck Chair in Global Food Security and the founder of Penn State’s PlantVillage, saw a talk from Zhiwen Liu, a professor of electrical engineering and an expert on optical characterization. Liu had founded Atoptix, a company focused on medical applications with a spectroscopy method, and Hughes suggested he consider looking at plants. That was an impetus to Atoptix both switching its name—to Croptix—and its purpose, which became diagnosing crop diseases using similar optical techniques. “Big things can happen when you bring physical science and the biological sciences together,” Randall says.

The complex’s high-powered microscope technology and cleanrooms have also been a drawing point to researchers from other universities or private industry. The MRI has allowed approximately 200 companies per year use its facilities, including the complex, with roughly 90 of those companies residing within the state. “The number of successes people have had at the faculty level and the student level, word gets out,” Randall says, “and people want to build their research around the facility.”

There are no classrooms or classes in the Millennium Science Complex, but it is common to see graduate students there working on faculty projects. The facility and the faculty it has attracted have both been recruiting tools for Penn State. “It’s a tremendous piece for student recruitment,” says Daniel Hayes ’97 Sci, ’04 PhD Eng, the Dorothy Foehr Huck and J. Lloyd Huck Chair in Nanotherapeutics and Regenerative Medicine and the department head for biomedical engineering, “but I also think it’s tremendous for their development, that they have access to those experiences.”

The facility’s high-tech instruments, such as the cryo electron microscopes (see sidebar, p. 47) are upgraded regularly. “It’s a priority for us that we stay on the cutting edge,” Read says. “It’s moving so fast. It’s very easy to get left behind. With some of those machines it’s a year, a year and a half before you have to upgrade.”

When the complex was in its infancy, Hudson created a series of diagrams showing how he hoped researchers in the building would connect, and he updated those diagrams as researchers from both wings published papers and earned grants together. “I think it helped convince the people in Old Main that we had really done something novel,” Hudson says.

The initial investment in the Millennium Science Complex was significant. More than a decade later, researchers collaborating with colleagues they may have never considered working with otherwise continue to push the boundaries of their fields. They’re grateful for the continued investment.

“Philosophically, I think most universities are interested in questions of materials and life science, in particular for health care applications and environmental impact issues,” Hayes says. “But none that I can think of have gone all-in on the resources that Penn State has.” 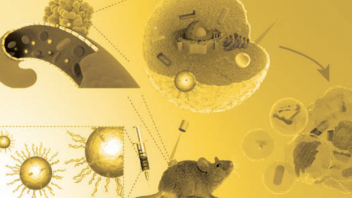 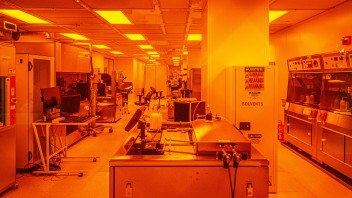 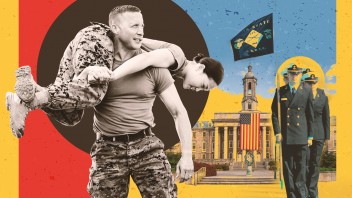