"A Great Man on Any Stage"

Jesse Arnelle, a multisport star and campus leader who became an influential and visionary alum, left an indelible mark on Penn State.

When Jesse Arnelle arrived at Penn State in 1951, he already possessed the build of a world-class athlete. Arnelle was 6-foot-5 and 225 pounds when he came to University Park from New Rochelle, N.Y., to play both basketball and football. One of Arnelle’s basketball teammates, Herm Sledzik ’53, ’56 MEd H&HD, recalls the school’s trainer, Chuck Medlar ’48 H&HD, describing Arnelle as having “the body of a Greek god.”

But over the course of his life, Arnelle ’55 Lib, ’62 JD Law, ’95h—who died of congestive heart failure at the age of 86 on Oct. 21, 2020—became known as more than one of the greatest two-sport athletes in Penn State history, even as he broke the school’s basketball scoring record, got drafted by both NFL and NBA teams, and spent time with the Harlem Globetrotters on an overseas tour. In fact, Arnelle wound up breaking far more significant ground outside of his athletic career, becoming Penn State’s first Black student body president and heading the school’s board of trustees while also founding one of the nation’s first minority-owned national corporate law firms.

Arnelle didn’t always see himself as capable of such things. While in high school, he told The New Yorker, after stumbling over an answer in Spanish class, his teacher cornered him and scolded him for not preparing himself adequately. “You have the ability to master any subject in the same way you have mastered that silly game you play—basketball or football or whatever they call it,” she told him.

Eventually, wooed by football coach Rip Engle—and by a young assistant coach from Brooklyn named Joe Paterno, who invited Arnelle to dinner at his moth-er’s house and convinced him to shun Ivy League offers—Arnelle wound up at Penn State. In 1954, he played wide receiver for a groundbreaking football team that included other prominent Black stars like Lenny Moore ’56 Lib and Rosey Grier ’56 H&HD; that same year, Arnelle led Penn State’s basketball team to its first and only Final Four, where they lost to LaSalle. Along the way, he so impressed both his teammates and classmates that he became one of the most popular figures on campus; he was elected student body president in the months before the groundbreaking Brown vs. Board of Edu-cation Supreme Court decision.

Arnelle inspired a strong sense of loyalty in his teammates, who were willing to stand up for him in those culturally charged times. Sledzik recalls one game against Colgate when an opposing player called Arnelle a racial slur. “If he does it again,” Sledzik and a teammate told each other, “we’re gonna get him.”

When the Colgate player indeed uttered the slur again, Sledzik elbowed the player in the face, getting himself ejected.

Arnelle spent time in pro basketball and with the Globetrotters, serving in the Air Force, and working on Robert F. Kennedy’s 1968 presidential campaign before joining a corporate law firm in San Fran-cisco. In 1985, he became a founding partner of Arnelle & Hastie, which was named one of the nation’s top 12 Black law firms by Black Enterprise magazine, and enabled Arnelle “to enter the rarified regions of power and money heretofore the preserve of white-shoed white men,” wrote The New Yorker in 1993.

“He was so impressive in every way—physically imposing, intellectually powerful, with enormous poise, grace, and integrity,” says Stephen Dunham, who met Arnelle when they worked together at a San Francisco law firm in the 1970s, and later became Penn State’s general counsel. “When Jesse spoke, people lis-tened. He was a great man on any stage.”

In May of 1968, a month after Martin Luther King Jr.’s assassination, and with the university being pressured by students to increase its enrollment of Black under-graduates, and to add more Black graduate students and professors, Arnelle was invited to accept the first annual Alumni Award at Penn State’s football banquet. Instead, he delivered a 25-minute address that emphasized the need for progress. “The Pennsylvania State University must become a principal player on the field of social and educational change,” he said. “Far too long it has been the largely impassive spectator, on a distant sideline, aroused momentarily by the reports filtering through concerning the great conflict rag-ing somewhere in the outside world.” Arnelle refused to accept his award.

As Carolyn Block-Arnelle, his wife of 39 years, told the Daily Collegian after his death, “He thought it was necessary, and he was willing to take a risk. He felt that somebody needed to do it, and he was in a good position to do it ... He enjoyed being a leader.” The next year, in 1969, Arnelle was elected to serve on the university’s Board of Trustees, where he remained until 2014.

Of his former colleague’s legacy, Dun-ham says, “People say Jesse was a great Penn Stater—and of course, he was. But to me, he was much more than that.” 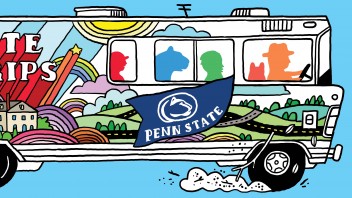 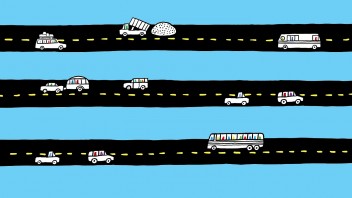 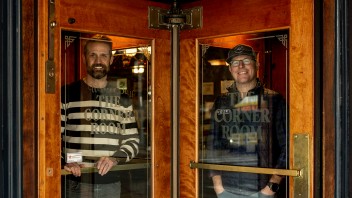 The new alumni owners of Hotel State College and Co. knew they’d have their hands full balancing respect for tradition and long-overdue updates to the iconic downtown business. They didn’t know they’d have to cope with a pandemic, too.
Robyn Passante '95 Com