After Shannon Thaler’s sophomore year of high school, a representative from a New York City modeling agency contacted her after seeing one of her Instagram photos.

Claim to fame: Fashion model with ONE Management NYC.

Model Behavior
After Shannon Thaler’s sophomore year of high school, a representative from a New York City modeling agency contacted her after seeing one of her Instagram photos. She met with the agency, and once she turned 16 a few months later, she signed her first modeling contract. “It kind of took off from there,” she says.

Ready for her Close-up
One of Thaler’s first gigs was a 2015 photo shoot for Seventeen magazine, when she was a high school junior. More recently, she booked a fashion shoot and May/June 2019 cover for Bridal Guide magazine and the online cover feature for Fashion Week Online’s November 2019 issue.

A World of Options
Her modeling contract allowed Thaler to take a gap year after high school—that’s when she discovered Penn State World Campus. While researching online degree programs, she found that many schools’ offerings were limited to liberal arts or business degrees. “I wasn’t going to stop until I found a place that had as specific of a degree as I wanted,” says Thaler, who’s enrolled in the digital journalism and media program. “At the time, Penn State World Campus was the only program that had the exact degree program I was looking for.”

The Write Stuff
An influential teacher in an AP writing course in high school set Thaler onto what she thought would be a career path as a broadcast journalist. “I figured I could combine my love for writing and my love for performing to do something in broadcast journalism,” says Thaler, an accomplished dancer who performed with the New Jersey Tap Ensemble as a kid. But she’s a writer at heart—“journals, diaries, I write every-thing down”—and helps pay the bills with an internship at Biz Bash Media, a New York City digital media company.

Food for Thought
Thaler stays active on social media (she has 22,000 Instagram followers) and writes a food blog, The Cutie Foodie, highlighting foods that help counteract an intestinal condition she suffers from. “The only way to truly heal it is with food,” she says. “My blog began as just a space for me to track what I was eating. I discovered this whole community of people who had gone through a similar situation as me.” 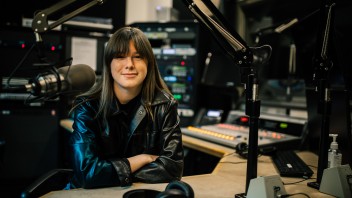