Consider this: A lifelong heavy smoker’s risk of getting lung cancer can be as high as 25%. But a woman who inherits a mutation in the BRCA1 gene has a 72% chance of getting breast cancer before age 80. Those odds are so terrible, and so terrifying, that many women choose a double mastectomy to either halt an early cancer or avoid getting it; in some cases, they undergo removal of their ovaries as well. Researchers have found that more and more women are making that life-altering choice: Between 2002 and 2012, according to an Annals of Surgery study, the proportion of women diagnosed with breast cancer who chose to get double mastectomies rose from 4% to nearly 13%.

Penn State biomedical engineering professor Deb Kelly wants to permanently change that excruciating calculus, particularly for women struck by cancer in early adulthood. Her goal is nothing less than the early detection, and ultimately the prevention, of BRCA1-related cancers.

“You think of cancer as an aging disease,” says Kelly, the Huck Chair in Molecular Biophysics and director of the Center for Structural Oncology in Penn State’s Huck Institutes of the Life Sciences. “But in these mutations, what should happen when you’re 70 is happening at 22 or 25. I really feel like women shouldn’t have to face the outcomes of either mutilating their bodies or not seeing their children grow up.” 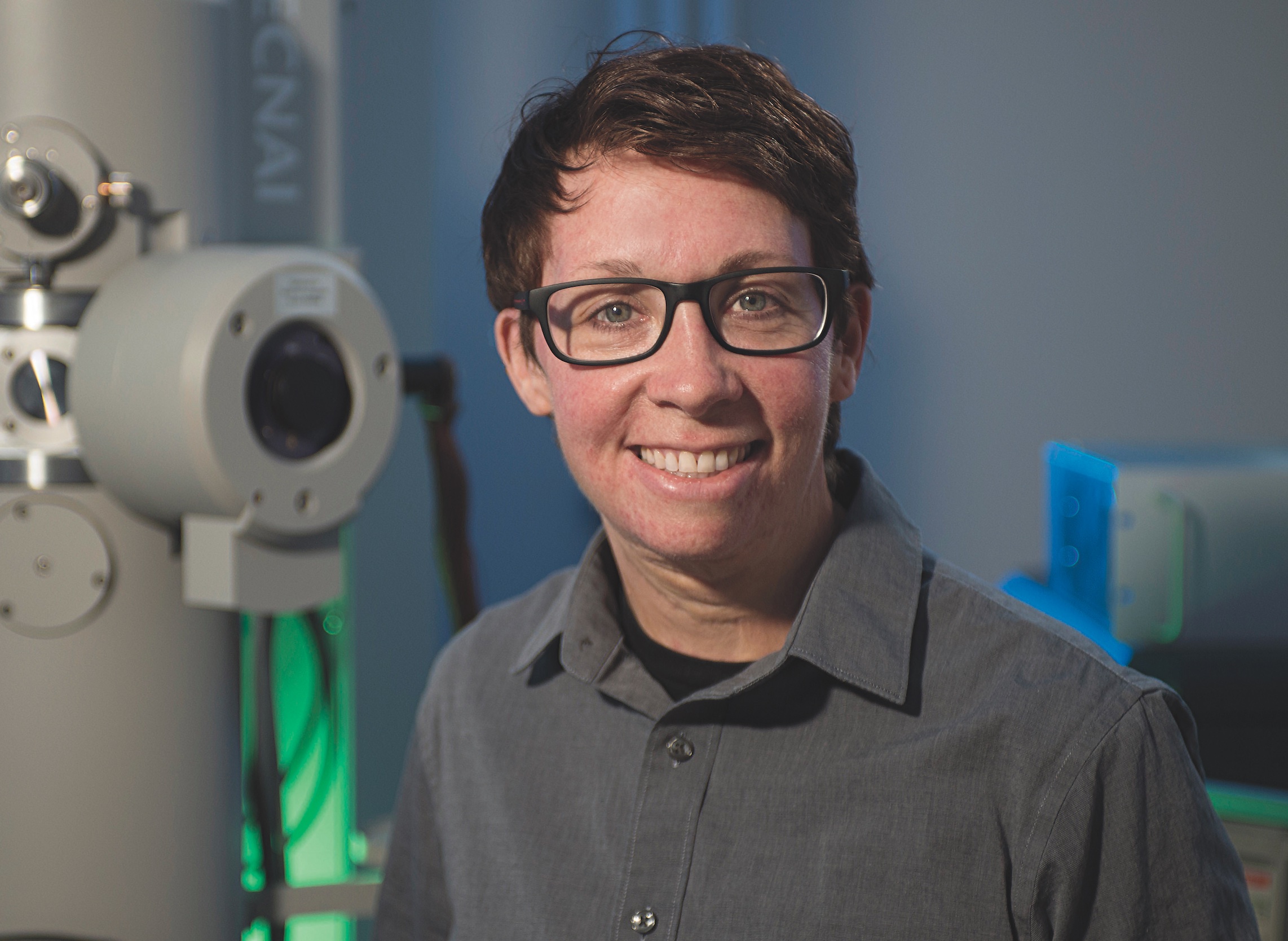 A pioneer in the use of electron microscopes, Kelly broke new ground in the study of breast cancer when she was based at Virginia Tech. She came to Penn State in 2019, bringing many of her lab colleagues with her, because the Huck Institutes offered “the best setup I’ve seen for high resolution electron microscopy at any university in the country.” It’s not just the more than $20 million worth of electron microscopes in the Millennium Science Complex, or that the entire structure is designed as a building within a building to prevent vibrations from reaching the sensitive apparatuses. It’s also the presence of a dedicated staff of specialists to maintain the microscopes. “When things break or go wrong,” she says, “I don’t have to struggle and try to fix it.”

Electron microscopes allow scientists to see cells at the level of a single atom, visualizing their precise shape and the way they interact with other biological substances. While she was still at Virginia Tech, Kelly’s team was the first in the nation to use that technique to identify the full length of the mutated BRCA1 (pronounced “brack-uh one”) protein. Her lab at Huck has gone beyond creating visualizations of the protein; it also has identified substances that may be able to prevent the damage caused by the defective gene, which could mean that one day, women who inherit this frightening mutation could avoid getting cancer altogether.

Like that of so many other researchers, Kelly’s work has been affected by the COVID-19 pandemic. She spent much of the past several months using her electron microscope expertise to analyze the SARS-CoV-2 virus that causes the infections. In an unpublished study, her team says it has identified the shape of a key protein in the center of the COVID virus, and has shown how antibodies in the serum of COVID-19 patients bind to that protein. It could help pave the way for even better vaccines or antiviral treatments.

In describing this work and Kelly’s breast cancer research, “‘innovator’ is not a strong enough word,” says biochemistry and molecular biology professor Susan Hafenstein, a colleague of Kelly’s in the Center for Structural Oncology. “She is a tremendous addition.”

Hafenstein says a key to Kelly’s work is her ability to grow patients’ cancer cells in the lab, and then harvest the cells’ proteins for direct examination in the electron microscopes, as opposed to growing the proteins in a cell culture. Her approach, Hafenstein says, is to “catch proteins in the wild. For years, we have purified a protein and stuck it on a chip and stuck that in a microscope. That’s like studying a lion in a cage. She goes to Africa and studies the lion in the savanna.”

The multimillion-dollar electron microscopes that allow such work use liquid ethane to freeze biological samples and view them inside a vacuum environment—reducing their vibrations to an absolute minimum. High-powered electron beams help produce images that computers can use to create 3D structures of the molecules. And they aren’t just pretty pictures. In biology, Kelly says, function follows form. The topography of a protein dictates how it will interact with other molecules in the body, and when a mutation creates a misshapen protein, as it does in BRCA1, that provides clues on how its activity in the body goes awry.

There are actually several different BRCA1 mutations, but one that carries one of the highest cancer risks is known as BRCA1 5382inC. It creates a protein that is far shorter than typical, and that’s where all the problems start. Normally, BRCA1 helps repair DNA in the body; damage caused by everything from the breakdown of hormones to ultraviolet light is fixed by a whole array of proteins inside the body, and the normal version of BRCA1 serves as a sort of cellular supervisor, directing other proteins to get inside the cells and mend the damaged DNA. “BRCA1 goes around to these other proteins and says, ‘You need to go to DNA, and you need to go to DNA,’” Kelly says, adding a Harry Potter reference for clarity: “It’s kind of like a sorting hat.”

The mutated version of BRCA1 not only can’t perform that function properly, but the body recognizes that it’s misshapen and sets out to destroy it. As a result, the normal wear and tear on DNA builds up, Kelly says, “and after years of damage you end up with a genetic disease called cancer.” When cells sense the BRCA1 5382inC mutation, they tag it with a protein known as ubiquitin, which causes it to break down. But in cell culture studies, Kelly’s group found that a counteracting enzyme called deubiquitinase can erase that tag and help restore the mutated BRCA1’s normal function. That means deubiquitinase-based drugs might one day be an effective cancer prevention therapy for women who inherit the BRCA1 mutation. Similar drugs are already being used to treat certain forms of leukemia, Kelly says, meaning it might take much less time than normal to set up clinical trials of potential breast cancer treatments.

“If we found a way to make this dysfunctional protein nearly whole again, so it can do its job, there’s an opportunity where you could implement these changes early on before women would even get cancer,” she says.

Kelly says doctors would not want to fix the mutated protein in women who already have cancer; in women who have breast tumors, a functional version of BRCA1 can be hijacked by the cancer and used to repair its fast-dividing DNA. For those women, there is yet another biological substance that might be effective in speeding up the self-destruction of BRCA proteins, removing them as a weapon in the cancer’s arsenal.

Besides BRCA1 and related BRCA2 mutations, Kelly’s lab also studies P53, another protein associated with many cancers. P53 also normally helps repair DNA damage in cells, but when it has a mutation, it too can pave the way for the onset of cancer. There is much about P53 that is still a mystery: “It’s another area that we’re currently investigating because so little three-dimensional information is known about it, despite the fact that it mutated in half of all human cancers.”

Kelly also started a project last February with doctors at Penn State Cancer Institute in Hershey to use the new gene editing technique known as CRISPR to understand BRCA mutations more deeply. The doctors there are creating new mutations of BRCA with the CRISPR tools, and Kelly will then explore which of them may cause cancer.

You might say that all of these scientific explorations got their start because Deb Kelly wanted to be a tennis player in college. As an undergrad at Old Dominion University, Kelly majored in chemistry, partly because the labs took place right before tennis practice. Then she discovered biochemistry, “which is chemistry applied to biological mechanisms, and that was really fascinating and awesome.” She ended up getting two chemistry degrees from Old Dominion, then worked on muscle biophysics research at Eastern Virginia Medical School in Norfolk, Va. “I thought biophysics was the most fascinating thing,” she says, “because you’re applying math and physics to biological questions that you couldn’t otherwise understand.”

Kelly eventually earned a Ph.D. in molecular biophysics at Florida State, which is where she studied cryo-electron microscopy under the tutelage of biologist Ken Taylor, whom she calls “one of the masters in the field.” After a postdoc at Harvard Medical School, Kelly set up her lab at Virginia Tech in 2011 and made her first breakthrough findings on cancer genes. Kelly, who grew up on Virginia’s coast, says part of her motivation for moving to Roanoke, Va., was to be near her family.

“It was a fantastic position because I could easily see my family as needed and be there for my mom, who was still sad about losing her mother,” Kelly says. Her grandmother was a breast cancer survivor, “and I began to think, Why are women still suffering from breast cancer? It’s horrible that we haven’t figured this out yet.”

Economically disadvantaged women don’t have insurance that will cover genetic tests, and so they just suffer with the disease. And that’s completely unacceptable. If a woman is geographically isolated, she might be less likely to go get
a mammogram.

At Penn State, Kelly’s research program is funded by National Institutes of Health grants totaling more than $1 million a year; in 2019, in collaboration with colleagues at Virginia Tech, she received a new grant to apply her electron microscope skills to brain cancer research.

She is also acutely aware of the social and psychological dimensions of breast cancer. She is concerned about women in rural and poor areas who may have the BRCA mutations and won’t realize it until it’s too late. “Economically disadvantaged women don’t have insurance that will cover genetic tests, and so they just suffer with the disease. And that’s completely unacceptable. If a woman is geographically isolated, she might be less likely to go get a mammogram. Or, if a mammogram is not covered by insurance, are you going to go do it?”

It speaks to Kelly’s commitment that even as she’s focused on cutting-edge research, she’s also thinking of the people most vulnerable to cancer’s impact.

Ultimately, she hopes to develop biosensors that could detect cancer inside the body and eliminate it before it gets a foothold. “There’s an app for everything, but not for cancer or cancer prediction,” she says. “What are we working on, really, if we’re not working on that?”

Mark Roth is a writer based in Pittsburgh. 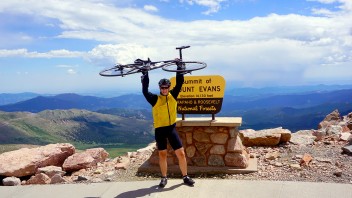 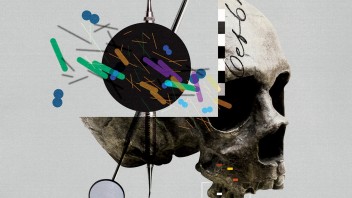 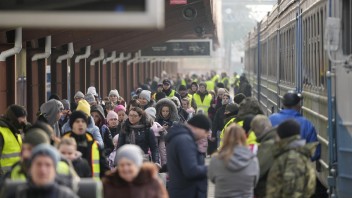