Working at Pocono Raceway is a year-round gig, but for operations chief Kevin Henry, there’s nothing like NASCAR week. 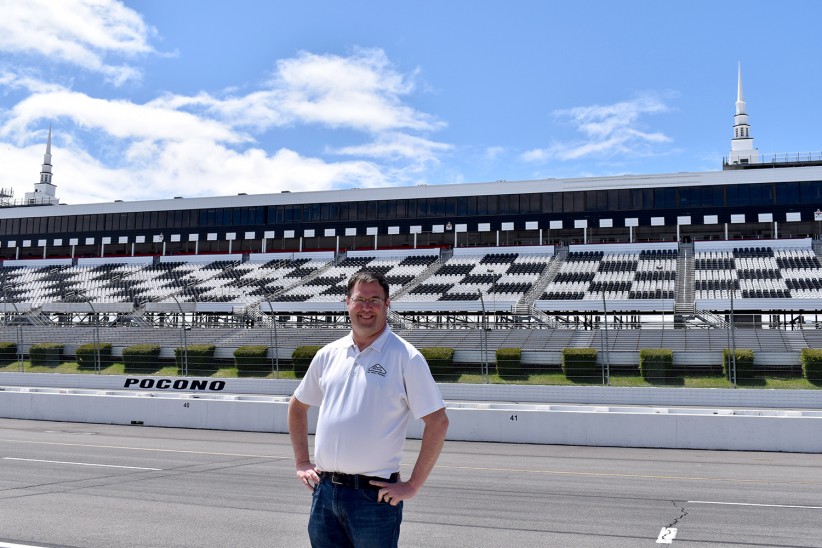 As the weather warmed this spring and Pocono Raceway entered its peak season, the massive facility in Long Pond, Pa., ramped up to a schedule that would average 10 to 15 events each week. Kevin Henry runs through the list: car and motorcycle clubs, manufacturer test drives, racing schools, police academies, plus one-offs like music festivals and air shows. “Including days that double up,” Henry says, “we have over 300 event days a year.”

As chief operations officer of Pocono Raceway, Henry ’99 H&HD, ’11 MPM Behrend is responsible for making sure every one of those events comes off without a hitch. But one event in particular dwarfs all the others: NASCAR week. The “Tricky Triangle,” as fans know the 2.5-mile course, has for years hosted a pair of summer NASCAR races; this year it’s just one, the Pocono 400 in July, as the sport looks to expand into additional markets. “The big race is a lot of our effort, a lot of the focus of what we do,” he says.

Fifteen years at Penn State, where he worked in athletics facilities and operations, prepared the former football student manager for handling big events with huge crowds and lots of moving parts. Just like a Beaver Stadium game week, preparing for a weeklong NASCAR residency brings myriad challenges. “Penn State opened my eyes to what it takes to put on events and run facilities big and small,” he says. “You were exposed to all the elements there.”

The race itself is an intense rush that—not unlike all those 700-horsepower cars—flies by in a noisy, colorful blur. Add in 76,000 fans and a race-day staff of nearly 1,700—most of whom fall under Henry’s supervision—and it’s easy to see why one race a year might feel like plenty. But Henry’s not complaining.

“What I tell people, whether it’s college athletics or a lot of professional sports, it’s a grind,” he says. “But NASCAR allowed me to do what I love to do and still have time for family and watch my kids grow.”