Penn State Berks student Kaiya Kizuka has her eyes on a 2026 Olympic run. 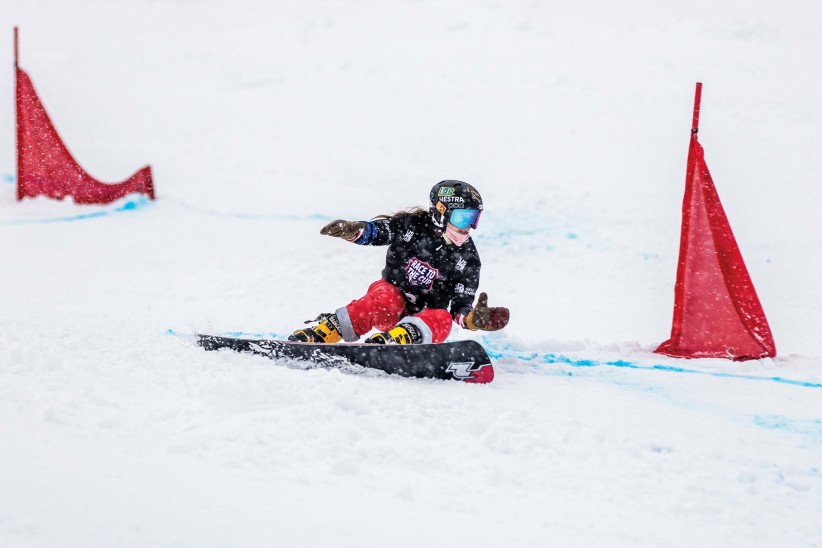 Kaiya Kizuka has a great idea for her capstone design project in mechanical engineering: She wants to design a snowboard plate that reduces the amount of vibration while riding. With luck, Kizuka could get the chance to show off her improved board on the podium at the 2026 Winter Olympics.

A 21-year-old junior at Penn State Berks, Kizuka is in the midst of executing a long-term plan. First, the Sinking Spring, Pa., native wants to finish her bachelor’s degree in mechanical engineering—including that capstone project—in 2022. After that, Kizuka will embark on the next phase of her snowboarding career, which involves moving to Europe, joining the World Cup circuit and, she hopes, qualifying for the 2026 games in Italy.

A snowboarder since age 5, Kizuka has been boarding competitively for nine years. She has qualified for three Junior World Championships, twice finishing as the top American woman in the parallel slalom. Kizuka also has competed twice at the FIS World Championships, most recently in March in Slovenia. Complications regarding COVID-19 testing caused her to miss a key day of training, but Kizuka still finished as the No. 2 U.S. woman in the parallel giant slalom. She also was the only U.S. woman to earn points in both the parallel slalom and the parallel giant slalom. “I had zero expectations,” Kizuka says, “so I was pleased to be able to hold my own there.”

That trip to Worlds capped a season in which Kizuka didn’t even expect to compete: She underwent two surgeries on her right ankle in 2020, after having a procedure on the left ankle in 2019. But Kizuka didn’t want to turn down an invitation to Worlds. To prepare, she competed at an FIS event in Colorado in February, claiming two medals, including the first gold of her career. She won the women’s parallel giant slalom despite limited practice time, a shoulder injury, fatigue, and a fall during qualifying.

“It took a little bit of time to sink in—I’ve been fighting for that first win since I got my first podium in 2016,” Kizuka says. “It was a chip-on-my-shoulder type of deal when I finally got it.”

Through fundraising, Kizuka hopes to be able to train in Europe by 2023. That would give her time to set her focus on the 2026 games. Still, first things first: “My biggest thing is, I don’t want to rush it, especially with school being the priority,” she says. “I’m so close to graduating.”