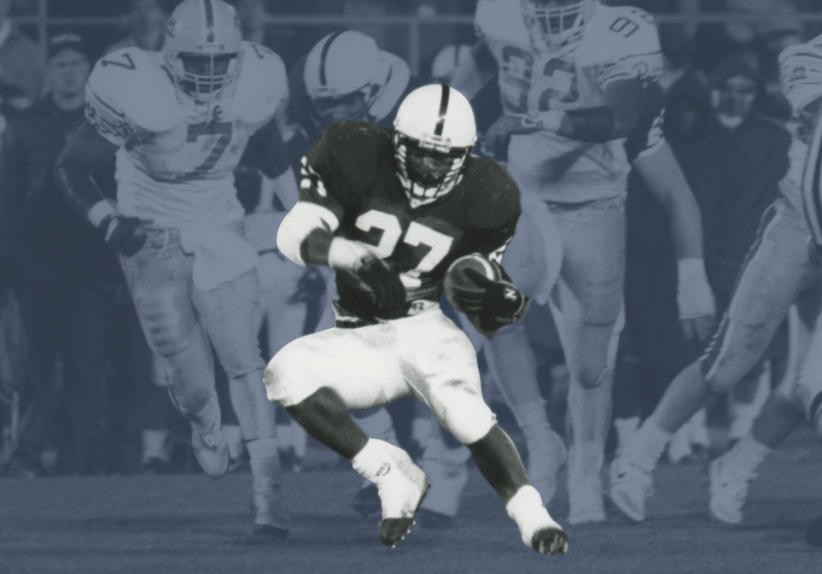 Keith Goganious doesn’t remember ever seeing Gary Brown get mad. “He was always smiling, always laughing,” Goganious ’91 Bus says of his former teammate. “There was something about his smile that was just infectious.”

Brown ’91 Edu, a running back—and sometimes defensive back—for the Nittany Lions from 1987 to 1990, ran for 1,321 yards in college before embarking on an eight-year NFL career playing with the Houston Oilers, San Diego Chargers, and New York Giants. That included a 1,000-yard season with the Oilers in 1993.

Goganious, a linebacker, recalls how Brown’s enthusiastic attitude would help keep grueling Penn State practices upbeat and productive. Brown would call his defensive teammates out to compete in one-on-one drills; he was also an unselfish teammate, willing to switch from running back to safety during the 1989 season, when he memorably stripped the ball from BYU quarterback Ty Detmer and returned it for a touchdown in the Lions’ 50-39 win in the Holiday Bowl.

The Williamsport, Pa., native spent the second part of his football life as an assistant coach: at Lycoming, Susquehanna, Rutgers, and Wisconsin at the college level, and with the Cleveland Browns and Dallas Cowboys in the NFL. A Cowboy led the NFL in rushing for three of the seven seasons Brown spent in Dallas as the team’s running backs coach. He was most recently the running backs coach at Wisconsin.

“Everything he did was to get the player to be the best he could be,” Goganious says.

Brown battled colon and liver cancer for the last several years of his life, and he was in hospice care in his final weeks. He died April 10 at age 52 in Williamsport. He is survived by his wife, Kim, and three children, Malena, Dorianna, and Tre.