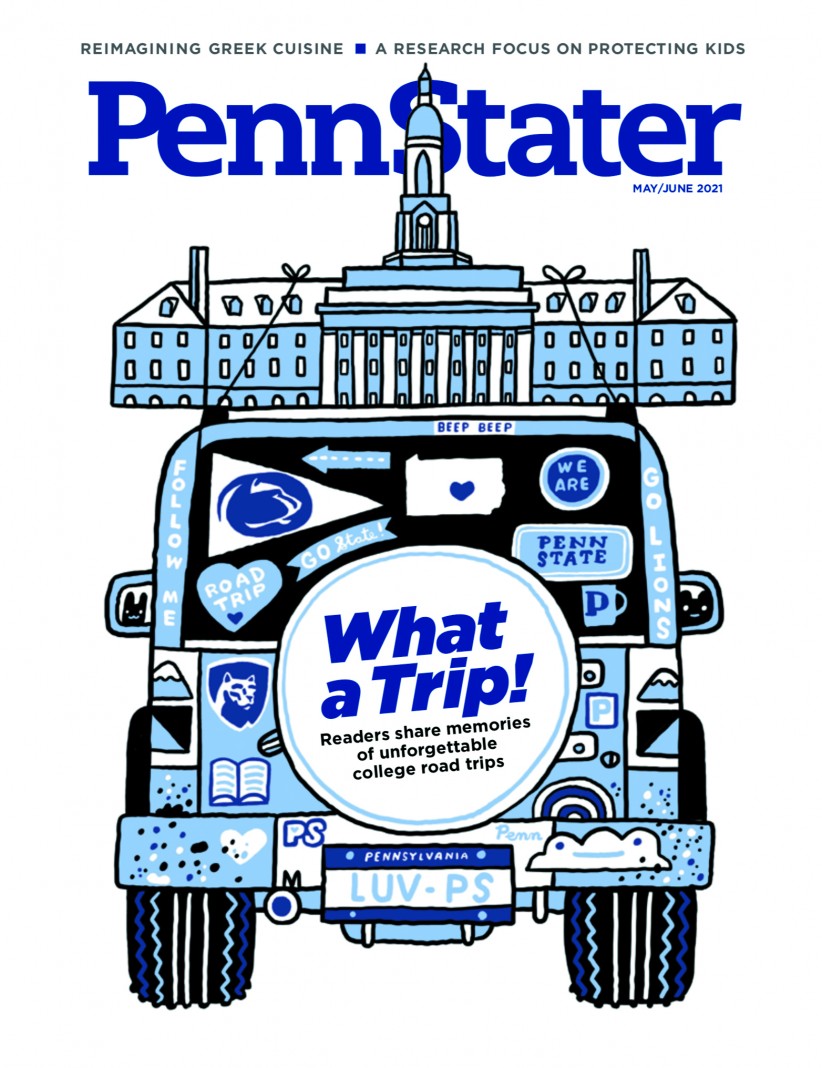 It was September 1984. Vicki Buchinski, Ed Casey, Ray Harris, and I, all sophomores, piled into my 1976 AMC Pacer (stocked with snacks and eight-track tapes) to head to the Meadowlands in New Jersey for the game against the University of Texas. My dad had connections and managed to swing us tickets on the 50-yard line. We were psyched—until we realized we were sitting in the middle of the very well-heeled Longhorn alumni section. The “older” folks around us (who could not have been more gracious) cheered when we ultimately joined them in their classic “Hook ’em Horns” hand gestures. Luckily, camera phones and social media did not exist then, or those images would live in infamy.
Mary Anne Leyden Greczyn ’87 Com
Arlington, Va.

Study Abroad Program, May 1972. The vehicle was big, maybe the length of a railway carriage. I hoisted my thumb and gave him a broad smile. Lifts during my four-day photo/sketching/hitchhiking tour of England were hardly dull: a sleep-deprived off-duty London cabby; newlyweds in a Mini with their pregnant cat and all their worldly goods sharing my lap; a soldier describing in detail “the Troubles” in Northern Ireland; a lady who spent the lift lamenting why she picked me up at all! Next was a biker on a Norton Commando 750. At a leisurely 80 miles per hour, he “lane split” the entire ride, not allowing for much conversation. As the sun set that afternoon, the juggernaut glided toward the curb. It had a chalky black finish which didn’t diminish its slab-sided, 12-cylinder dignity. It stopped, and I was “welcomed aboard.” The interior smelled of musty cracked leather, and the cavernous passenger compartment was stacked with rusty auto parts, on cushions with their springs poking through. “Thanks for stopping,” I said. “This car is cool, what is it?”

Sometime in the 1980s, my daughter bought me a pair of Penn State–embossed trousers—blue corduroy with Nittany Lions all over them—for $100. I threw a royal fit: “You can’t afford it, and I can’t accept them!” I am a Depression baby, but I should have graciously accepted them. A few years later, while returning home after a football game, I had the pedal to the metal, and here came the flashing blue lights in my rearview. The Pennsylvania state trooper inquired where was I going at 85 mph in a 55-mph zone. “We were going home to Rochester, N.Y., after the game.” He flashed the flashlight on my trousers and remarked, “You come all the way just to watch a game?” I said, “We’ve done this every season since ’82.” He then said, “You know, the fine here in Pennsylvania is $185—now slow down. We need to see you for the rest of the games!” My daughter never said a word, but she had a smile on her face from ear to ear!
J.A. DePaolis ’58 Bus
Rochester, N.Y.

Joe Watson’s letter about the Atlantic Walk [“Letters,” May/June, p. 10] brought back memories of that great and exhausting experience. I have the certificates on my office wall commemorating completion of the walk, which was in response to a challenge by St. Andrews University. There were 772 starters with 277 finishers in 1964, and 508 starters and 193 finishers in 1965.
Gene Burak ’67 Bus
Garden City, N.Y.

Joe Watson’s letter brought back some pleasant and unpleasant memories. A pleasant one was walking down Mount Nittany at 3 a.m. on a starry night. The unpleasant memory was how I felt the next morning. On the way to class, it was easy to spot those who had participated: We were all painfully inching our way along at a snail’s pace.
Dave Owens ’65 EMS
Charlotte, N.C. 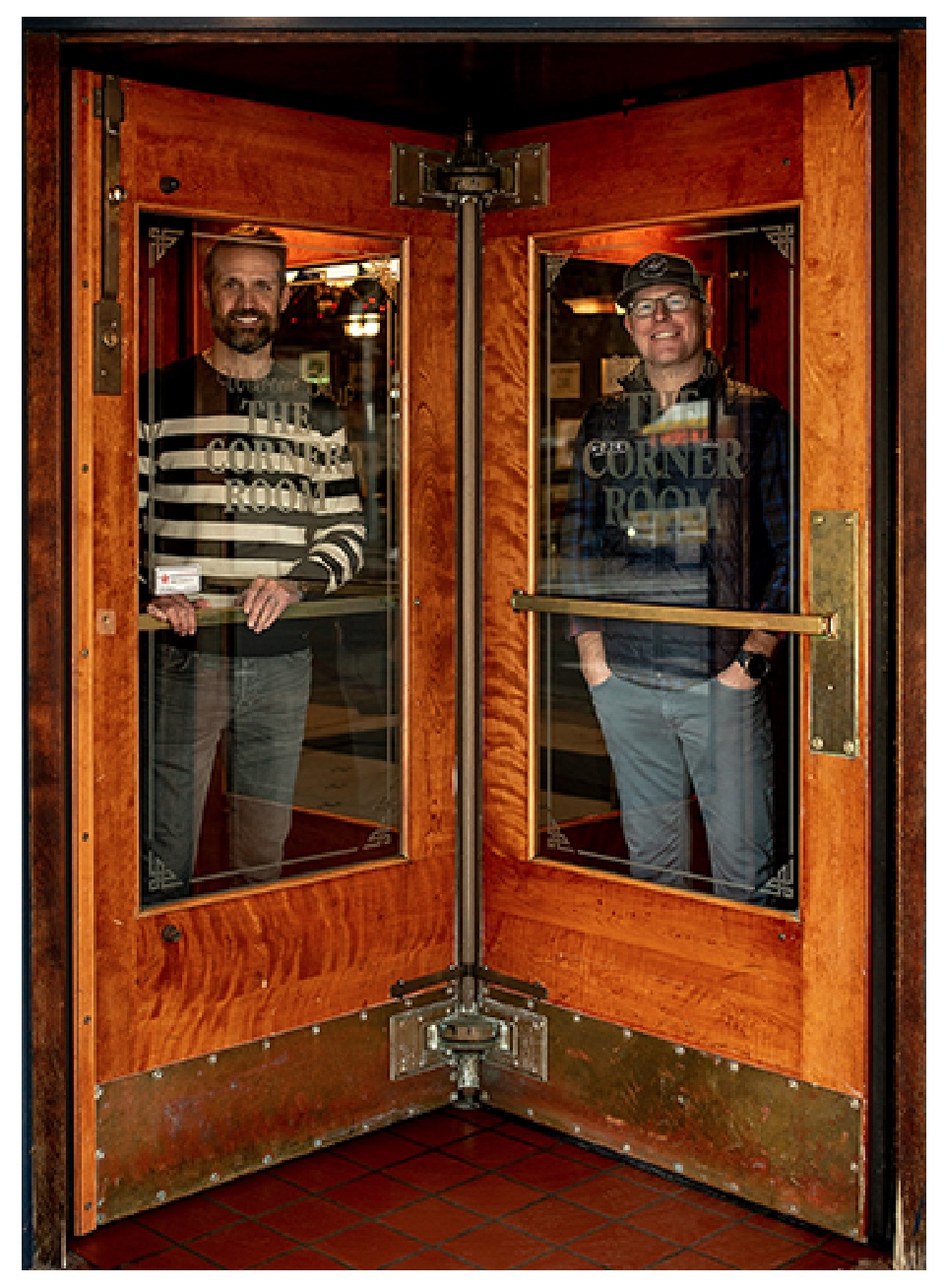 I appreciated the article “Turning a Corner” [March/April, p. 32] about the new owners of the Corner Room. I remember reading that it was up for sale. My initial thought was, “This will become another cellphone store.” My mother, Beth Harling, told me how she used to stay at the hotel in the 1950s when she would travel from New York City to visit my dad, who was working in the physics Ph.D. program. Once they were married and living in the State College area, they would enjoy meals at the Corner Room. My dad, Otto K. Harling, has since passed, but my mother reminisces about their time there: picnics at Stone Valley and hiking Mount Nittany to see Sputnik cross the night sky. It has been a while, but my mom sometimes makes sticky buns that bring those memories into our home.
Maura Harling Stefl ’84 H&HD
Fayetteville, N.Y.

The March/April issue was a delightful read, from the Corner Room through Muhammad Ali’s ride to the man behind Keeney Beany. The best part was Ali Borhan’s squash story ["Unsquashable," p. 22]. Just yesterday we had a fellow Penn Stater over for lunch who was talking about the course he took with Borhan years ago. Thanks for keeping the memories of the best years of my life alive with each issue.
Uday Turaga ’02 PhD EMS
Katy, Texas

Thank you for the springtime playlist [Practical Advice, March/April, p. 22]. Maybe a seasonal playlist could be included with the start of every new season.
James Snyder ’98 Agr
Ridgway, Pa.

As with most graduates of a certain age, I used to first check the Class Notes, and now find I am drawn to In Memoriam. Seeing familiar names rekindles warm memories of the good people who were part of my Penn State experience. I am always drawn to the featured Penn Staters on these pages, and although I generally do not know them, I always read and appreciate these final tributes. They are written with dignity and respect for lives well lived, and I appreciate these people as part of our Penn State character. Thank you for these caring farewells.
Bruce Henderson ’61 Com
Huntingdon Valley, Pa.

Last year, our daughter, Laura Clapper Zabanal, successfully auditioned for the U.S. Army Old Guard Fife and Drum Corps. She is stationed at Fort Myer in Arlington, Va. Recently, Laura was promoted to staff sergeant, and we were able to attend the ceremony. When my wife, Christy Clapper, and I arrived wearing Penn State apparel, we heard shouts of “We Are” from several corps members. Following the ceremony, Laura gave us a tour of Fort Myer, including “General’s Row,” the homes where prominent generals reside. Each general displays flags outside of their home to depict their education and interests, and Penn State flags were prominently displayed outside of several homes. We were excited that so many other Penn Staters are serving in the military at this site.
Joseph Clapper ’92 DEd Edu
Boalsburg, Pa. 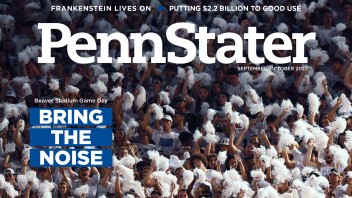 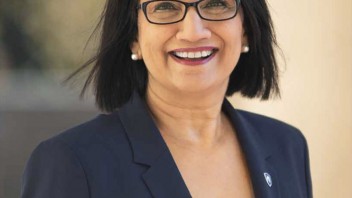 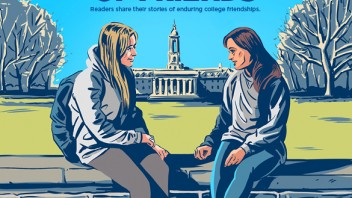